The semiconductor industry has been growing at a rapid pace over the past few years. This is largely due to the increase in demand for microchips from various industries such as automotive and aerospace, as well as consumer electronics.

Semiconductor manufacturing companies in Arizona have been making a lot of capital investments to expand their production capacities and hire more employees. The industry provides high-paying jobs to many people in Arizona.

The United States is now prioritizing bringing Semiconductor manufacturing back!

​
Semiconductors power the computer chips in our cell phones, computers, and even the chips found in cars.

Since semiconductors are essential components of nearly all modern technologies, a secure domestic supply chain became an economic and national security priority for the United States in 2022. On July 28th 2002 the United States congress passed the $280 billion CHIPS and Science Act, which will subsidise domestic production of Semiconductor manufacturing in the Unted States. 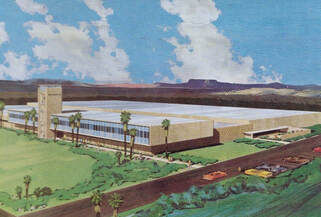 
​ Arizona is already home to numerous advanced semiconductor manufacturing plants, and even more are coming...
​
The state of Arizona has been home to many semiconductor & electronics manufacturing Companies over the years, starting in the mid 1950's by the Southwest's pioneer semiconductor company - Motorola.

In 2021, Forbes Magazine called Arizona the new "U.S. Semiconductor Central", due to the growth of the semiconductor industry there. Large high-tech manufacturers have been drawn to Arizona due to it's lower taxes, lower restrictions, local incentives, skilled worforce, and amount of available land.

Currently, over 22,000 Arizonans are employed in the Semiconductor industry, which generates more than $8 billion annually for the state economy.

Thousands more high-paying jobs are being created, with both Taiwan Semiconductor and Intel now building multiple new wafer Fabs in central Arizona, and Samsung is considering Arizona as location for a possible new Fab site.


​
The central part of Arizona now has many major electronic and semiconductor manufacturing plants located in the Phoenix metropolitan areas of Chandler / Ocotillo, Mesa, Tempe, North Phoenix. Microchip and Raytheon have some manufacturing facilities still in the Southern part of the state in Tucson.

​Motorola's research and development lab in Phoenix introduced the world's first commercial high-power germanium-based transistors in 1955. The lab would expand over time to become Motorola's semiconductor division and by 1960 they would have three large manufacturing sites in the Phoenix area.


Intel
​One of the most well-known semiconductor companies in Arizona is Intel Corporation. Intel is Arizona's largest high-tech manufacturer employer. The company started up their first wafer manufacturing Fab to be built in Arizona (Fab 6 in Chandler, AZ) back in 1980, and later came their 720-acre Ocotillo Fab 12 site built nearby in 1996. ​The Ocotillo site is now home to three major semiconductor Fabs: Fab 12, Fab 32 & Fab 42.

In Sept. 2021, Intel broke ground on "Project Eagle", starting construction of two new leading edge wafer Fabs in Ocotillo, called Fab 52 & Fab 62. At a cost of $20 billion, the new Fabs are the largest private sector investment in the history of the state. The two Fab's are reported to be designed to  support Intel Foundry Services (IFS) products, as well as Intel’s cutting edge 20A process products (5nm).

Both new Fabs are expected to start chip production as early as 2024. Once the new Fabs are completed, Ocotillo will be Intel's largest semiconductor manufacturing complex worldwide. Potiential customers for the new foundry chips coming out of Fabs 52 and 62 include Nvidia, Amazon, MediaTek, Qualcomm, and many others.
​​

t a cost of $12 billion, the new wafer Fab is expected to start production of their advanced semiconductor chips by 2024, and initially employee around 1900 workers.

"Fab 21" will become TSMC's second Fab to be located in the United States. Potential customers of TSMC's 5nm chips manufactured at this site could be Nvidia, Qualcomm, Apple, Broadcom, Xilinx, and others.

Other growing High-tech industries in Arizona

Arizona has been a hot spot for new data centers since 2018. This is because of the state's low energy costs, favorable tax policies, and proximity to major internet hubs. These new data centers, which are used for storing and processing data, will provide even more high-paying jobs and economic growth for the state.

​Google and Facebook have also announced their plans of building their own data centers in this booming area, as well as numerous other companies.

CyrusOne has a 1,000,000 sq ft data center located in Chandler in the price road corridor in the  Continium Business Park just south of loop 202, just minutes from the Intel Ocotillo campus. When it was built in 2012, this 57 acre site was the largest data center campus in the United States. CyrusOne also building a second data center in East Mesa's growing Elliot Road Technology Corridor.​

The Phoenix Arizona area avoids the headaches of increment weather (snow, fog) during testing, and has one of the least restrictive autonomous car regulation laws in the U.S thanks to the Arizona State government passing an Executive order in 2015 that requires the state to “undertake any necessary steps to support the testing and operation of self-driving cars.”
​

Construction has now begun on an additional 2.8 million sq foot factory, part of the phase 2 expansion, increasing the capabilities of the AMP-1 assembly site.

Nikola Motor Company
Also, clean energy Semi-Truck manufactuer NIkola has it's headquarters in Phoenix, near Sky Harbor Airport. Nikola is also in the process of starting up a new assembly manufacturing plant just built near the town of Coolidge (one hour drive south/east of Phoenix) to build their "Tre" fuel cell electric vehicles (FCEV).

​
Solar Energy Technology
​
Solar cell technology is also big in the sunny state of Arizona, with no less tham 15 solar companies located throughout the Phoenix area. Central Arizonaa has has the right climate and the right amount of sunlight for solar cell technology to be efficient. This makes it an ideal place for solar energy manufacturing companies to set up shop.

Of the many companies in Arizona that manufacture solar panels, only a few have made it big in the industry. One such company is First Solar, Inc., which was founded in 1999 and has grown to become one of the largest manufacturers of solar panels in the world.

First Solar's world headquarters is located in Tempe. First Solar is the largest solar panel manufacture in the U.S. They have been operating for over 30 years and have more than 10,000 employees worldwide. Locally, First Solar now has many projects going on in Arizona including powering the new Microsoft energy-efficient data centers, located west of Phoenix in the Goodyear / El Mirage areas.

SolarCity, is one of America’s largest solar power providers with more than 1 million customers across 15 states. They provide residential and commercial customers with clean renewable energy through their own network of installers or by leasing them a system outright.

Medtronic, a leader in implantable microelectronic & IC design, development and manufacturing for the medical industry, has a 30-acre Enginnering and Production campus located in Tempe.