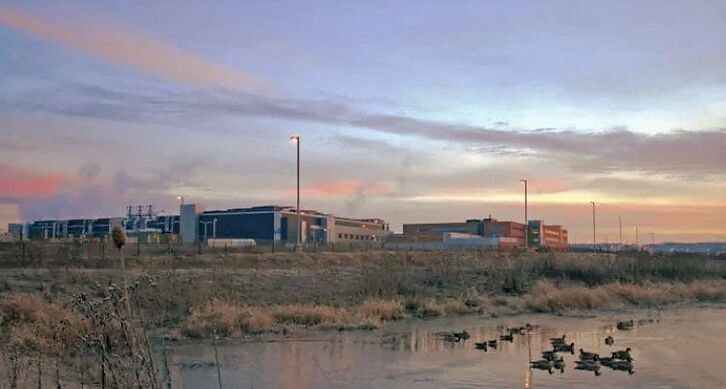 Intel Semiconductor Fab in Hillsboro (Portland) Oregon (2021)
​
The state of Oregon has been home to many semiconductor & electronics manufacturing and design Companies since the 1970's. The state has a long history of semiconductor manufacturing, and it continues to be a hub for the industry. The Portland area is now known as the "Silicon Forest".

Electronics manufacturing is among Oregon’s largest industries, accounting for $15 billion in annual exports – nearly 60% of the state’s total. The region’s factories cover the industry’s full range, from the silicon wafers that serve as the foundations for computer chips, to the production equipment to make the chips, to the finished chips made by Intel and other large manufacturers.

In 1974 Intel built their first Fab in Oregon, FAB 4 located in Aloha, a suburb of Portland. The Fab ceased production in 1996, but Intel's Aloha campus is still a key Assembly / Test site for manufacturing operations.

Electro Scientific Industries (ESI) - MKS Instruments
ESI was Oregon's first electronics manufacturing company, starting out in Portland in 1953 producing resistance measuring machines. In the 70's they became the leader in laser trimming systems for thick film resistors on hybrid circuits. In 2019, they were bought out by MKS Instruments which now is headquartered in Beaverton. Their current manufacturing site is located in Klamath Falls, Oregon. They now specialize in laser-based processing and micro-manufacturing and drilling solutions for printed circuit board (PCB), substrate packages and interconnects for high-volume manufacturing.


​
Micron Technology
Micron, a leader manufacturer of RAM memory, had multiple semiconductor Fabs in both Beaverton and Gresham but have since been bought up or closed.

On Semiconductor
In the cities of Beaverton, Coos Bay, Corvalis, and Portland, On Semiconductor (OnSemi) has Engineering and design centers. In Gresham they have a Semiconductor manufacturing FAB producing analog chips for automotive, industrial, medical and defense products on 200mm wafers. LSI Logic originally built the new Fab in 1995, which they sold to OnSemi in 2006 when LSI Logic made the decision to go Fab-less and outsource their chip manufacturing.

Analog Devices
Anaog Devices has a factory near Portland in Cama WA, that makes specialized chips for automotive, defense, medical, and industrial applications.

Apple
Computer and iPhone maker Apple Inc. has a growing office in Washington County. In late 2018, the company said that its Portland-area outposts would be part of an effort to add hundreds of jobs in several cities.
The company has employees working their in such roles as CPU verification engineers, CPU architects and SoC physical electrical analysis engineers.

Lam Research
Lam Research, a leading designer and manufacturer of semiconductor equipment for DRAM and NAND memory chips, opened their 52 acre Tualatin research center with a 600,000-square-foot facility in 2002 that now employees 4000 people. In 2021 they expanded their equipment manufacturing to a new facility in the Portland suburb of Sherwood. Job roles at the Sherwood facility include assemblers, test technicians, engineering technicians, and material handlers.
Lam’s Tualatin site was originally opened in 1990 as a chip factory owned by a Japanese company, Oki Semiconductor.  Lam took over the site when they aquired Novellus in 2011.

TSMC - Taiwan Semiconductor / WaferTech
WaferTech, a subsidiary of TSMC, has a 200mm wafer foundry Fab on a 260 acre site in the town of Camas WA. near Portland. The factory was built in 1998.

Jireh Semiconductor
Jireh as a small facility in Hillsboro that makes analog chips for power management.

Hitachi
Hitachi has had a small operation in Hillsboro since 2014. Hitachi is currently building a large semiconductor research facility in Hillsboro in the same Technology park where Intel has it's Ronler Acres Fabs. It is expected to open by 2022.

Celestica
Celestica has a semiconductor and electronics equipment manufacturing facility in Portland that they aquired from Brooks Automation back in 2011. This site specializes in manufacturing front-end modules for wafer handling and transportation, vacuum transfer modules, and uniquely designed sub-systems for many of the major semiconductor manufacturers.

Kokusai Semiconductor Equipment
Kokusai is a world leader in the design, manufacture, installation, and maintenance of 200mm and 300mm wafer Fab tools. They have a 18,000 sq. ft. facility located  in Vancouver, Washington, across the Columbia River from Portland Oregon. This site handles their training, sales, customer and field service, spare parts, technical support, and technology groups.

​Nordic Semiconductor
Nordic is a fabless semiconductor company from Norway specializing in low-power, cellular and Bluetooth chips for IOT connected devices has an Engineering office located in downtown Portland.

Ampere Computing
The chip startup founded by former Intel President Renee James has several former Intel execs at its large office just north of downtown. Ampere is also a fabless chipmaker. It makes data center chips designed to be both less expensive and more efficient than competitors. The company, which is backed by The Carlyle Group, Oracle Corp. and Arm Holdings, released its first product in fall 2018.

Qorvo
Qorvo specializes in designing and manufacturing RF communications chips for iPhones and other smartphones, the defense industry and telecommunications networking gear. They have a wafer Fab and testing facility in the Portland suburb of Hillsboro, located close to the Intel Ronler Acres campus. Qorvo took over the old TriQuint Semiconductor manufacturing site after the merger in 2015 of TriQuint Semiconductor and RF Micro Devices.

ASML, Applied Materials,  SEH America, and Siltronic
These major wafer equipment manufactures have a large presence in the Portland / Vancouver area, providing services to many of the local semiconductor wafer companies.