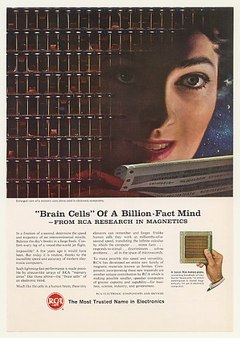 An RCA Core Memory Ad (1964)
Radio Corporation of America (RCA), was an early supplier of vacuum tubes from radio industry and other electronics. RCA was one of the eight major computer companies (along with Burroughs, Honeywell, Control Data Corporation, NCR, IBM, General Electric and UNIVAC) through-out most of the 1960s.

RCA's turnaround was its computer division. It was started in 1958 by Sarnoff and then RCA President John Burns. RCA ended it's computer business in 1971.

The history of computing hardware starting at 1960 is marked by the conversion from Vacuum Tubes to Solid State Transistors and later the Integrated Circuit.

By 1959 discrete transistors were considered sufficiently reliable and economical that they made further vacuum tube computers inefficient and  uncompetitive. Computer main memory slowly moved away from Magnetic Core Memory devices to solid-state static and dynamic semiconductor memory, which greatly reduced the cost, size and power consumption of computer devices.

​The RCA 2N109 was one of RCA's first commercially available transistors, first introduced in 1955.  It was designed for use in audio output circuits for early transistor radios. Later, the 2N109 would become a long-time favorite among hobbyists for use as a a general purpose transistor. 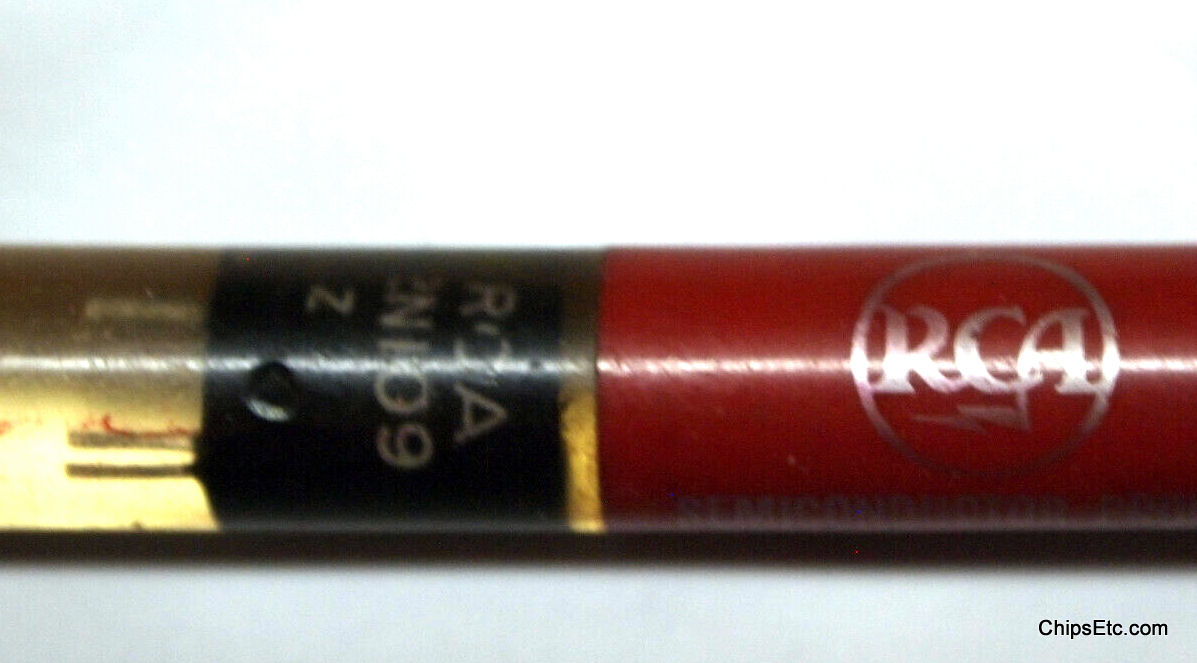 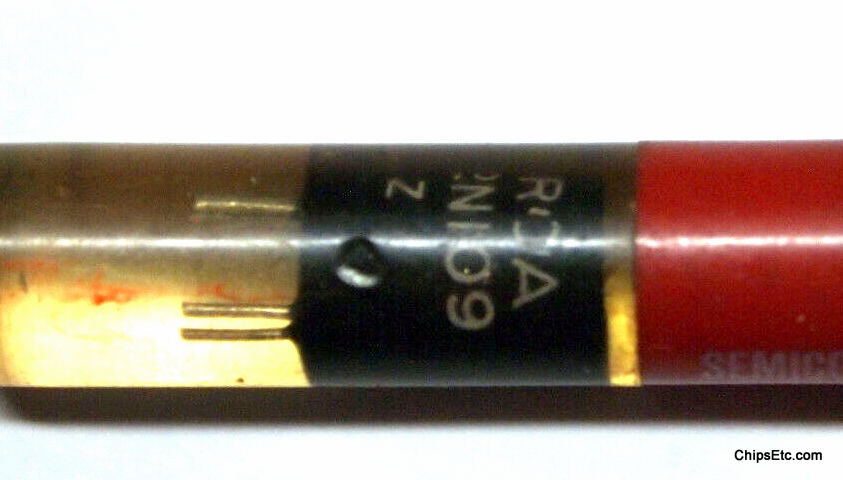 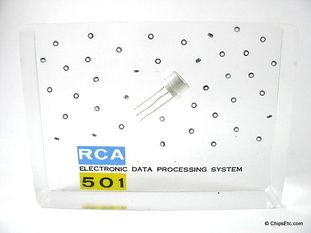 The 501's many transistors were mounted onto PCB module cards. 16k Memory was standard and was composed of Magnetic Core Memory Modules. RCA eventually withdrew from computer manufacturing in 1971.

Clear Lucite paperweight has an actual RCA 2N581 transistor as well as a bunch of Core Memory "Doughnuts". Item has "RCA 501" and "Electronic Data Processing System" embedded inside as well. 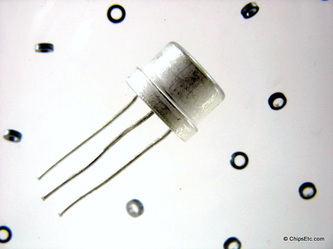 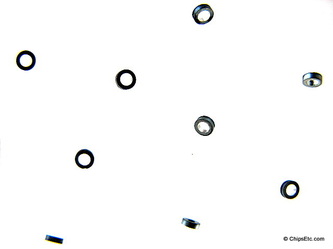 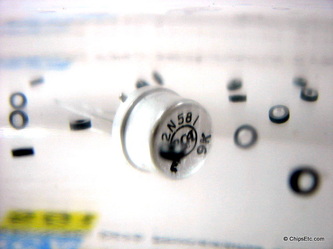 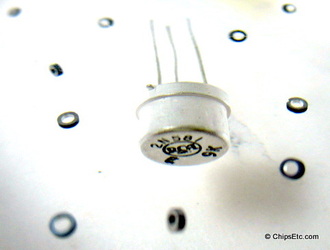 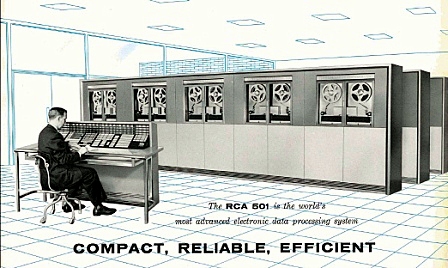 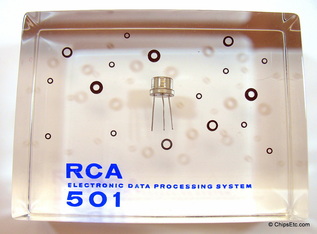 Item #825
This Clear Lucite paperweight is similar to the item above with a slightly different design.

It also contains an actual RCA three-lead transistor as well as a bunch of Core Memory "Doughnuts". 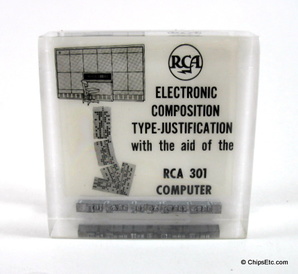 The RCA 301 was offered with between 10k to 40k of core memory. Input was from Magnetic tape, paper tape, or punched cards.

Clear Lucite paperweight with a white backing. The graphics are wonderful with a black and white mainframe computer with chair in the upper left, and an arrow comprised of miniature punched cards pointing to an actual metal typeset embedded within the acrylic at the bottom that has individual pieces that spell out the words "Hot Type Set By Paper Tape". 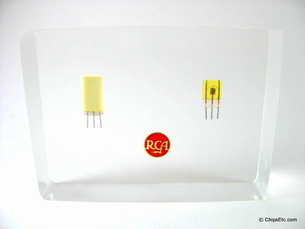 In 1953 RCA introduced to the public the First Transistorized Television using Transistors similar to these.

The earliest Junction Transistors were constructed using glass bases with molded epoxy encapsulation surrounding the circuitry. It was soon discovered that this construction process led to moisture contamination and caused the Transistors to fail prematurely. Most manufactures would quickly change to the new process of using hermetically sealed metal cases which solved the issue with premature failure. 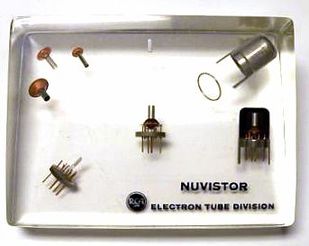 Sold
The RCA Nuvistor was a thimble-shaped triode vacuum tube which offered a much smaller package size compared to typical tube designs of the day. 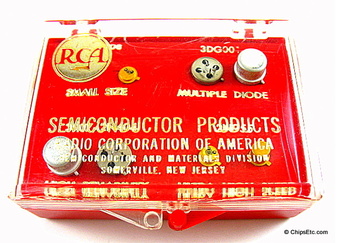 Item #590
This is an RCA Semiconductor salesman's sample. It would have been used out in the field to show potential RCA customers the various types of transistors & computer diodes available for sale at that time. 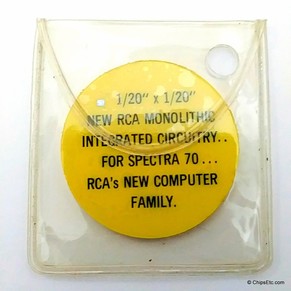 Item #961
This promotional acrylic Token from RCA features an actual Integrated Circuit chip that was the type used in their new Spectra 70 line of computers.

One side of token Reads: 1/20" x 1/20", New RCA monolithic integrated circuitry..for Spectra 70...RCA's new computer family.
​
​Other side of token reads: Each chip contains 2 logic circuits comprised of 15 transistors and 13 resistors. Hundreds of chips are made from wafers of this size. 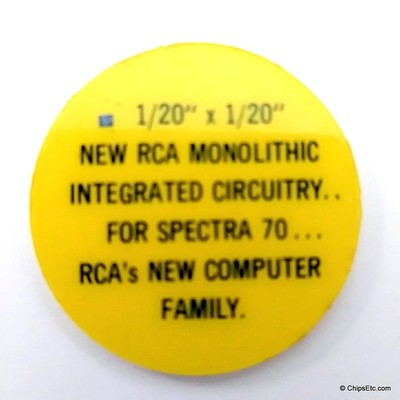 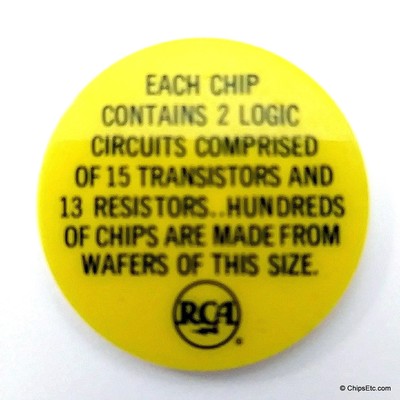 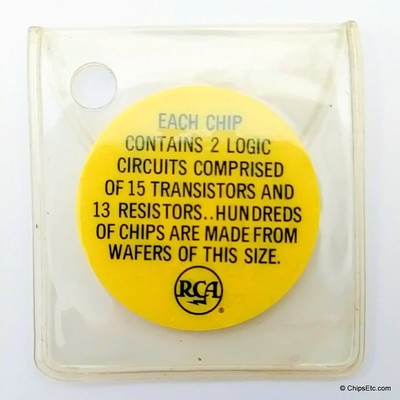 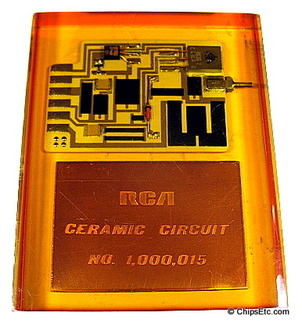 Item #849
This limited edition paperweight celebrates RCA reaching the milestone of producing one million Solid State Ceramic Circuits for use in their line of televisions. The actual circuit embedded inside is identified as being the 1,000,015th unit to be manufactured.

RCA introduced it's XL-100 AccuColor line of color televisions in 1970. The XL-100 was RCA's first completely solid state television (no vacuum tubes used except for the picture tube). By August 1972, RCA had produced one million solid state circuit televisions!

The new XL-100 used 12 plug-in type solid state circuit boards, know as AccuCircuits. Each AccuCircuit was composed of a Ceramic Circuit board that contained discrete components such as transistors, resistors and capacitors. 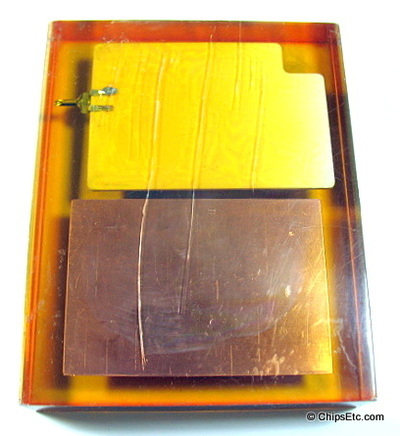 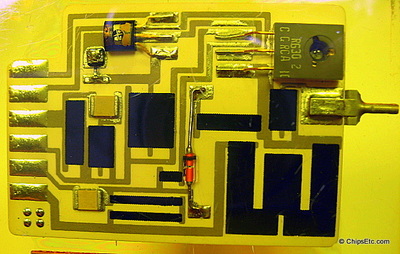 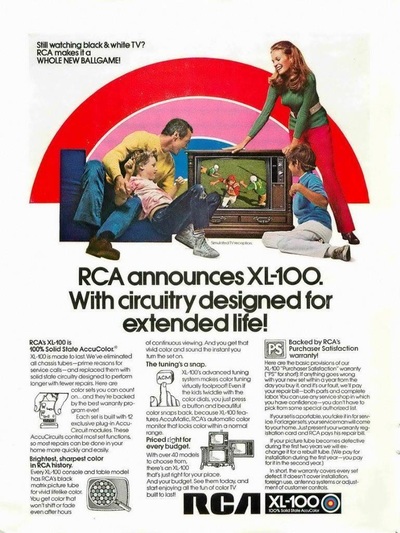 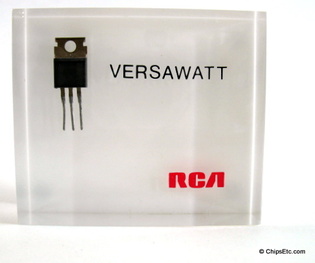 Item #455
This 3 lead RCA VERSAWATT power transistor is encased in a clear block of Lucite with white background. Comes in it's original box with pamphlet which explains the "volumetric efficiency" of the RCA VERSAWATT. 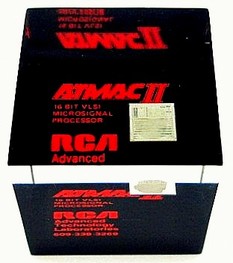 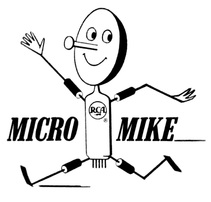