​Early television sets used vacuum tubes for their analog circuits. This technology was used for many years until they were eventually replaced by transistors and solid-state technology. The last vacuum tube televisions made were in the mid 1970s.

Vacuum tubes consumed a lot of power, created heat, and burned out rapidly, leading to many television owners having to get their televisions serviced and tubes replaced often.


The first commercial black and white Television sets went on sale to the public in 1946. Televisions started becoming popular in the United States by 1950.

The first commercial NTSC color television set (Model H840Ck15 made by Westinghouse) went on sale to the public in February 28th, 1954. RCA, General Electric, Philco, Raytheon, and others would introduce their own models of color televisions in the months to follow. 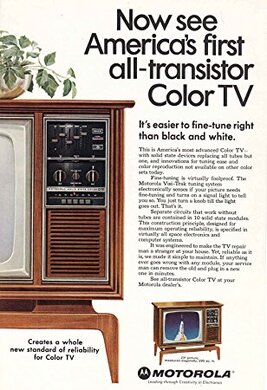 In 1952, RCA engineers were busy experimenting with new Transistor designs with goals of developing the worlds first experimental All-Transistor Television. By 1953, RCA introduced to the public the first example of a working Transistorized Television.

The first commercially available Transistorized Television offered for sale to the public was a black and white unit made by Philco﻿﻿﻿﻿ in 1959. Toshiba developed the first Japanese transistor television set shortly thereafter in that same year.

Texas Instruments began the first commercial production of transistors for radios in 1954. Very soon after, Sony acquired the rights to transistor production, producing televisions throughout the next decade that would make previous vacuum tube models obsolete.

The first all-transistor COLOR television made in the United States was introduced by Motorola in 1967.

ITT semiconductor chips in televisions (1983)
Zenith's "Chromatic Brain" introduced in 1969 in their "Chromacolor" line of televisions was the first integrated circuit ever used to produce a color TV picture.

Toshiba took the lead over its competitors in adopting IC technology to color televisions, starting with automatic fine tuning (AFT) circuitry in 1969. This was followed by the development of audio and color signal demodulation circuitry, as Toshiba aggressively worked to apply IC technologies to the television.

​In 1971, Toshiba introduced their model 20C60. It was the world's first color television which would made use of a large amount of IC chip technology, containing 11 IC chips total. This IC television did not use IC circuits entirely. Rather, it used both IC circuitry and transistors. The IC circuit was used for the tuner, output, power supply, horizontal oscillation, and amplifier, as well as most of the video amplifier components. In addition, the newly developed 2SC1172 transistor combined horizontal output and high-voltage generation

Star television offered the first total electronic tuning system in a Television in 1974. Also in 1974, Integrated Circuits made possible the Magnavox Odyssey - the first home video game system that the general public could connect to their home television. 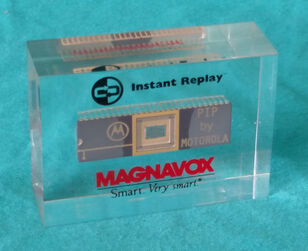 Motorola "instant replay" IC Chip used in Magnavox Televisions (1988)
The use of Integrated Circuits in Televisions allowed for the industry to add numerous new features over time to improve the TV users experience.

Among the most popular new features made possible by Integrated Circuits were "Instant replay" and "Picture in Picture (PIP)", which were both introduced to Televisions sets in the late 1980s.

Years later, in 2008, Samsung would introduce the first Smart TV. Smart TV's are designed with hardware to allow access to the internet, and featured software applications that could stream videos to the television from numerous sources.

© 2021 ChipsEtc.com. All Rights Reserved. Other product and company names shown may be trademarks of their respective owners.