Since the 1980's, Intel has been promoting their famous line of CPU & Memory computer chips with samples of their chips embedded in Lucite and made into keychains.

Typically, the Intel computer chips used in these promotional keychains were actual production chips that were rejected for not meeting Intel's quality or reliability standards during their final electrical testing.

Intel Keychains were given out to employees to recognize a new product release or corporate milestone achievement, given away as sales promotions at computer & electronics trade-shows, or offered for sale to the public at the Intel Gift Stores located at select Intel campuses, as well as at The Intel Museum gift store in Santa Clara.

During the mid 1990's Intel also had some defective Pentium CPU chips mounted into gold plated promotional keychains & jewelry that were offered for sale to the public at a few of the larger U.S. University's and Museums. 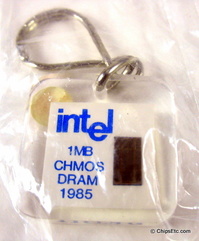 Item #469
This is one of the oldest Intel Keychains in our collection. This keychain has an actual Intel 1MB (1 Megabit) memory chip embedded in it. On the back it says "JEDII".

Item is new in sealed bag. 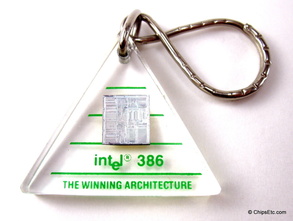 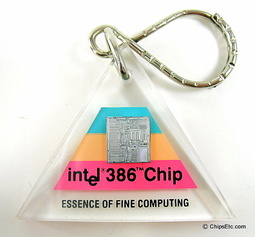 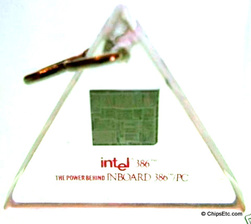 Intel offered an Inboard 386 accelerator board that you could plug into your old motherboard that could be used to upgrade a 286 system to a 386 an increase performance. 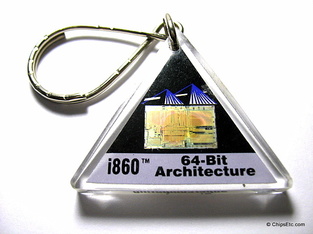 Item #595
This Lucite keychain has an actual Intel i860 RISC processor chip (also known as the Intel 80860). On the back it reads "Intel i860 /  Entering Supercomputing Dimensions".


The Intel i860, introduced in 1989, was designed to deliver supercomputer performance in a single VLSI chip.


The 64-bit design of the i860 balanced integer, floating point, and graphic performance, and its architecture made it suitable for many supercomputer & other professional applications including engineering workstations, scientific computing, 3-D graphics workstations, and multi-user systems. The chip was available in speeds of 25 to 50 MHz.

Unfortunately, the Intel i860 processor never achieved commercial success and the project was terminated in the mid-1990s. 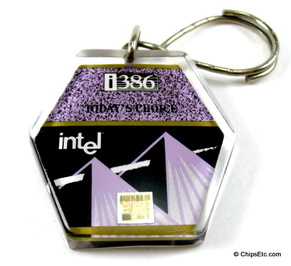 The background graphics on this keychain are showing pyramids of sand, and reads "today's choice" (the i386) and "tomorrows vision" (the i486).

Both of these chips were manufactured by Intel using the same 1 micron CHMOS IV technology. 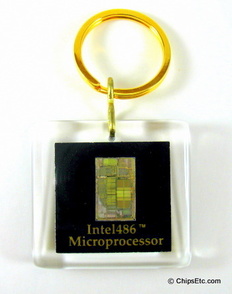 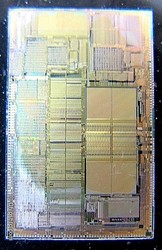 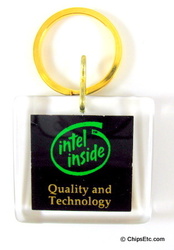 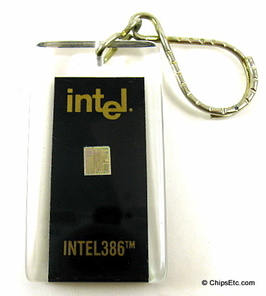 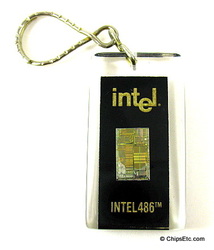 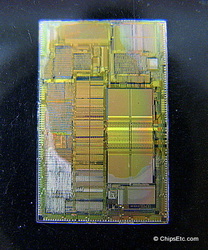 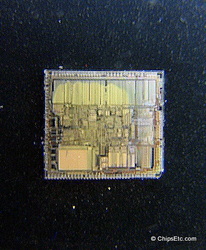 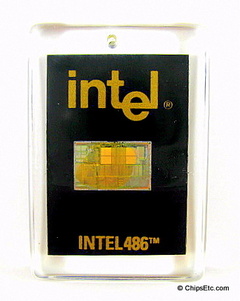 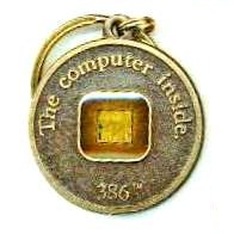 Sold
In 1990, with the advent of it's new 486 processor, Intel became the first CPU maker to promote the idea that it's microprocessors were the "brains" inside the computer. With this new advertising strategy, Intel began targeting computer buyers directly rather than computer marketers. As a result, Intel created a new tag line for their advertising campaigns: "Intel. The computer inside". This was later shortened to "Intel inside" in 1991. Two years later in 1993, the Intel Pentium processor was introduced with much of it's huge success owed to the "Intel Inside" branding campaign created years before.

This bronze keychain has an Intel 386-DX processor mounted on the front and reads "The Computer Inside - 386". This DX version of the Intel 386 processor had 275,000 transistors and was manufactured using 1 micron CHMOS IV technology. It was Intel's first 32-bit desktop computer CPU and was also the first significant microprocessor to be single-sourced.

Sold
This bronze keychain, siliair to the one above but has an Intel 486 processor mounted on the front and reads "The Computer Inside - 486". 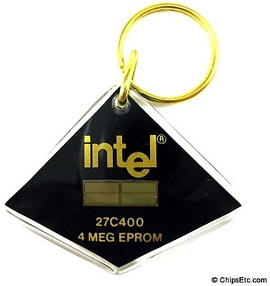 Item #139
The Intel 27C040 was a 5V-only, 4 Megabit UV Erasable, Programmable, Read Only Memory. It was pin compatible (32 pin DIP) with lower density DIP EPROMs (JEDEC) and provided for simple upgrading to 8 Mbits in the future.

This EPROM was used in high performance CPUs in applications ranging from video arcade games to numerical control to office automation to telecommunications. The 27C040 was equally at home in both a TTL or CMOS environment. It programmed at a fast 60 seconds using Intel's industry leading Quick-Pulse Programming algorithm.


This is a rare Intel keychain. 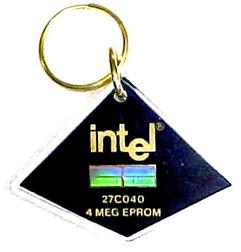 Other side of the Intel EPROM keychain 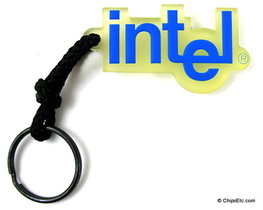 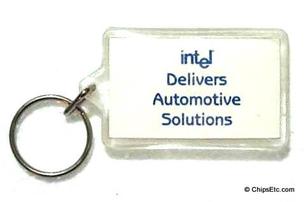 The 8061 chip and its derivatives were used in almost all Ford automobiles built from 1983 through the end of the 20'th century.

For 17 years, Ford Motor Co. used "Quality is job one," both to convince car buyers of its emphasis on quality and to remind workers of quality's importance 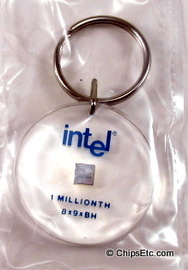 Item #142 (#140 similar)
The MCS-96 family of 8X9XBH 16-bit microcontrollers consisted of many members, all of which were designed for high-speed control functions in embedded systems, including use in automobile systems.

Starting in 1982, Intel offered these microcontrollers in various combinations of on-chip options including with or with-out : 10-bit 4-channel ADC (Analog to digital converter), 8Kb of either ROM or EPROM memory.

They were offered in both 48-pin PGA/PLCC and 68-pin DIP packaging and were manufactured by Intel using their HMOS-III process. 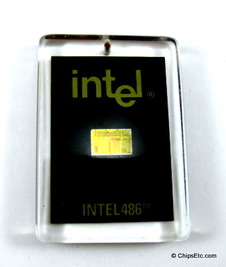 This one contains a real 486 chip embedded  on one side with 486 circuitry image on the other. Chip is embedded in Lucite. 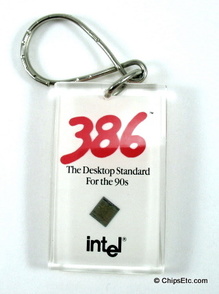 Item #035
The Intel 80387 (387 or i387) was the math co-processor for the 80386 series of Microprocessors, and the first Intel co-processor to implement the IEEE 754 standard in every detail. It was used to perform floating point arithmetic operations directly in hardware.

The i387 was compatible only with the standard i386 chip; the cut down i386SX had its own co-processor, the Intel 80387SX, that could work with the SX's narrower data bus.

The 80387 included full coverage of the trigonometric functions, Intel's previous offerings being limited to an argument range of plus or minus 45 degrees. 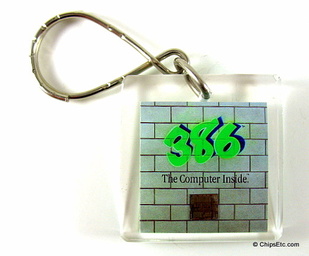 Without a Co-processor, the 386 normally performed floating-point arithmetic through (slow) software routines, implemented at run-time through a software exception-handler. When a math Co-Processor is paired with the 386, the coprocessor performs the floating point arithmetic in hardware, returning results much faster than an (emulated) software library call.

This is an Intel 386/387 "Chip off the old block" Keychain. On one side of the keychain you'll find an actual Intel 386 CPU embedded in the keychain and on the other side there is a 387 Math Co-Processor. 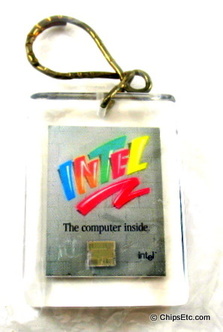 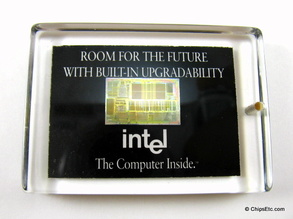 Item #108
Another variation of the Intel 486 CPU keychain.

This one reads "Room for the future with built-in upgradability" & has the pre "intel inside" tagline; "The computer inside". 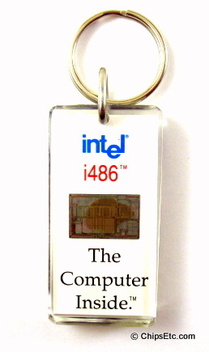 The Intel Inside Ad Program was launched in 1991 but during initial Ad development Intel briefly used the tag-line "The computer Inside", this was later shortened to "Intel Inside"  in 1993.

The DECpc 433 workstation from Digital Equipment Corp. (DEC) was a leading edge desktop computer that had and Intel 486 processor (could be upgraded to Intel Pentium overdrive processors at a later date) and could run DOS 5.0 with Windows 3.0 and had a 3.5" floppy drive.