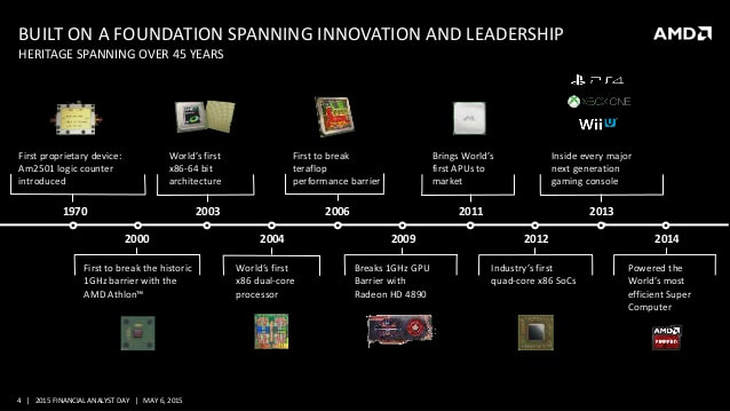 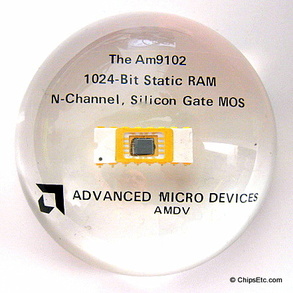 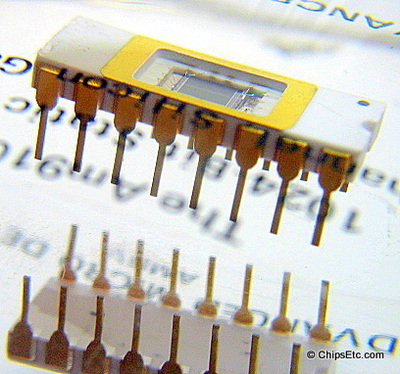 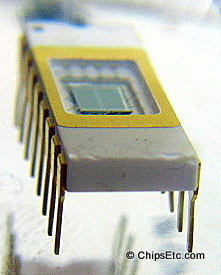 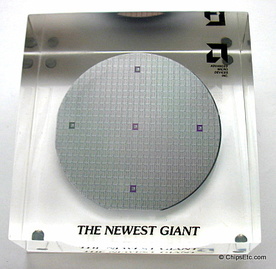 The semiconductor industry transitioned from 3" to 4" wafers starting in 1976 which allowed for an increased number of chips per wafer.

Reads "The Newest Giant", with AMD logo in upper corner. 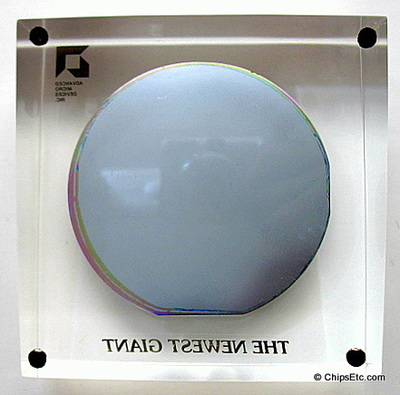 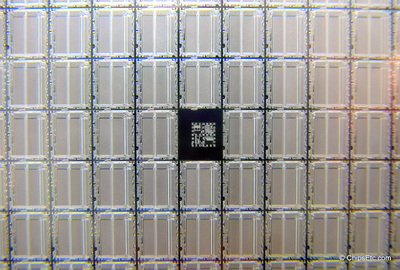 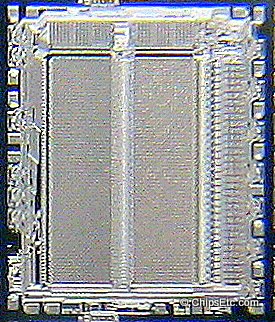 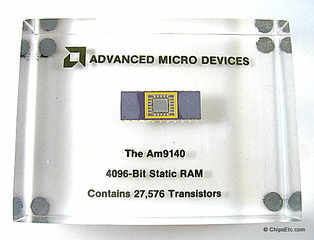 The AMD AM9140 chip contained 27,576 transistors and came in a 22-Pin ceramic & gold Dip package. The lid on this sample chip is not attached, so the die and bonded gold wires are view-able.

In 1977, Advanced Micro Devices licensed American Microsystems, Inc. to build its proprietary 4096-bit MaS static memory family. For an undisclosed sum, AMD provided detailed technical assistance for the design of the AM9130/9140 and related low-power versions. AMD also provided updated information as device improvements were made. These TTL compatible circuits required only +5 V and were organized lK x 4 and 4K x 1. The standard device offered speeds to 200 ns with maximum power dissipation of 550 mW, while the low-power version offers maximum power dissipation of 350 mW with speeds to 250 ns. 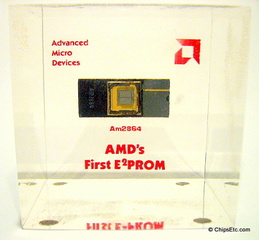 The first release of the AM2864 chip came in a 28-lead ceramic DIP package with gold frame & legs. The original gold lid has been removed allowing for viewing of the AM2864's MOS memory chip and gold wire bonding.

By 1988, standard EPROM memory would start to be replaced by the more advanced, and much faster, NOR Flash memory technology. 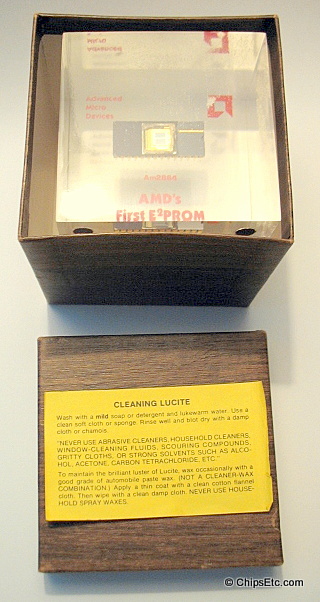 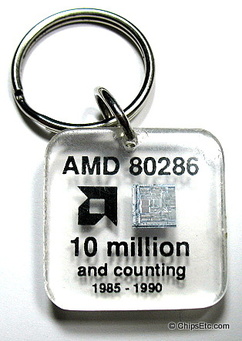 In a licensing agreement with Intel - AMD, Intersil, Fujitsu & Harris Semiconductor were also given the right to manufacture the 80286 chip under a requirement from IBM that there had to be a second-source supplier of the chips. AMD would start manufacturing 80286 chips starting in 1985. By 1990, AMD had sold over 10 million of their 80286 microprocessors. This Lucite keychain with an actual AMD 80286 chip was given to select AMD employees in recognition of that milestone.

The 80286 would be the last microprocessor that Intel would license to be second-sourced by AMD. With Intel's decision to no longer share it's microprocessor design architecture, AMD would be forced to have to reverse-engineer Intel's next processor, the 32-bit Intel 386, when it was introduced in 1985. This greatly delayed AMD's ability to release a competing product on time. AMD engineers would work many hours on the 386 redesign (code-named project Longhorn), eventually releasing their own version of the 386, the AM386, almost 5 years later in 1991.

In 1996, AMD would release their first microprocessor to be completely designed "in-house", the 32-bit AMD "K5".

This Lucite keychain features an actual AMD 80286 Microprocessor chip embedded inside. The chip is a manufacturing defect (the die was mis-sawn thru the dicing operation). 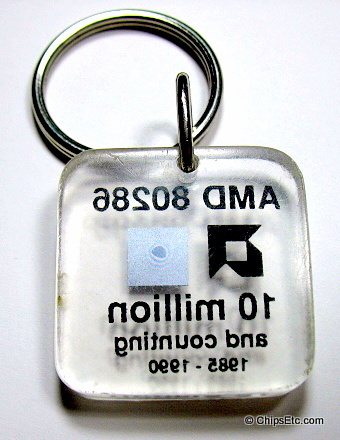 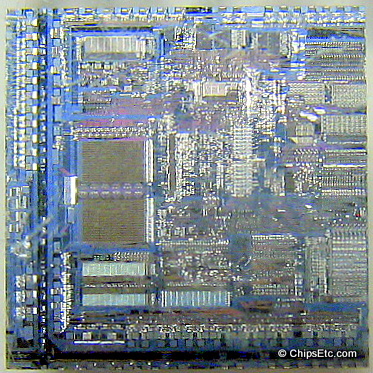 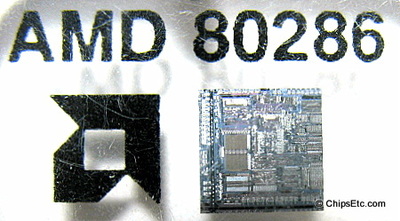 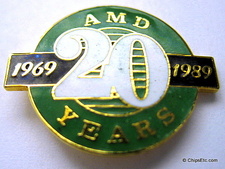 Item #720
AMD celebrated it's 20th anniversary in 1989. This Metal and enamel pin was given out then to it's employees.

AMD was incorporated in 1969, and went public three years later in 1972. Their first proprietary product was the Am2501 logic counter chip introduced in 1970. 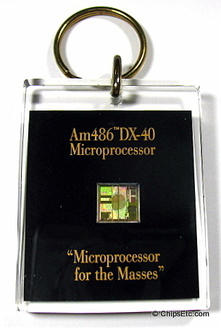 The AMD Am486 was designed to compete with Intel's 486 and when released in April 1993 it offered Windows 3.1 (and the upcoming Windows 95 PC customers) a 20% better performance for the same pricing. 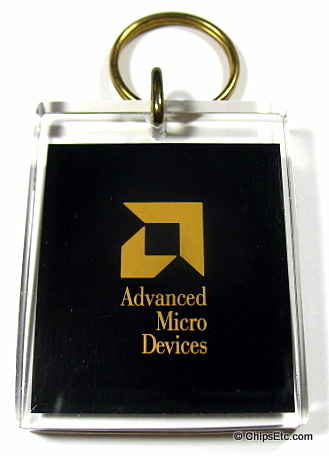 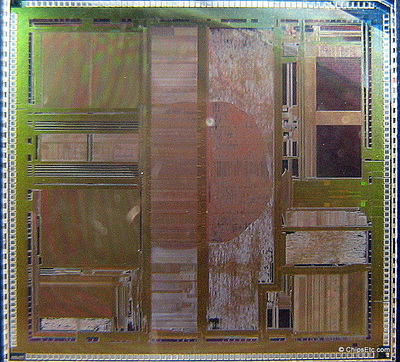 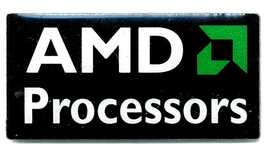 Sold
AMD promotional pin from the mid to late 1990s.

Reads "'AMD Processors" and has the green AMD logo. 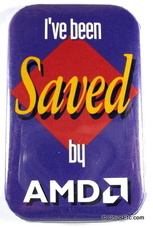 Item #747
​AMD promotional pin that was given away at the COMDEX computer trade show in 1995.

Bill Gates' "Information At Your Fingertips" keynote speech was given at this COMDEX event in 1995, it became the basis for his book The Road Ahead. 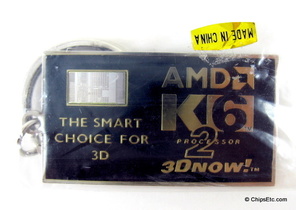 The K6-2 was designed to compete with the Intel Pentium II processor. An enhancement of the original AMD K6, the K6-2 introduced AMD's 3D-Now! technology as an answer to Intel's MMX technology.

The K6-2 was a huge financial success for AMD and it helped the company to generate income to develop its next very successful chip, the Athlon. 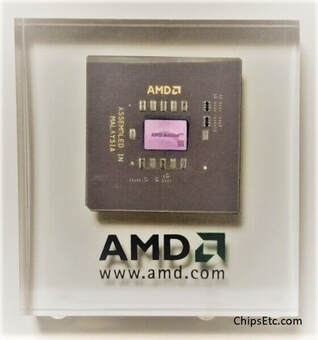 Sold
​
​This Lucite paperweight from AMD features their Athlon CPU, introduced in 1999.

The Athlon processor competed primarily with Intel's Pentium III processor, and was the first commercial desktop CPU to break the 1 GHz barrier on March 06, 2000. 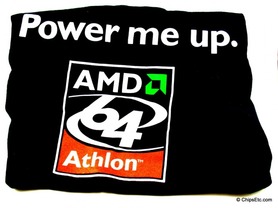 Item #006
The Athlon 64 was the first Windows compatible 64-bit processor targeted for the  consumer. It was AMD's primary consumer microprocessor, and competed primarily with Intel's Pentium 4 processors.

Code named Instanbul, this 2.6 GHz version of AMD's Opteron line of  performance chips was designed for high-end Servers and workstations. It came with 6 MB of on-chip L3 Cache Memory. 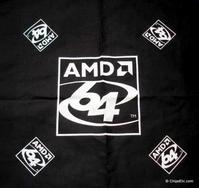 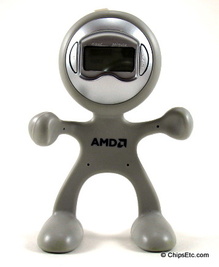 Item #165 (#166 & 167 similiar)
This limited release AMD Flex Man character clock is made of bendable rubber and has an LCD clock.

Item #579
A new deck of playing cards given away as a promotional item from AMD.

The cards are black and have the AMD green logo and "AMD Smarter Choice" on them. 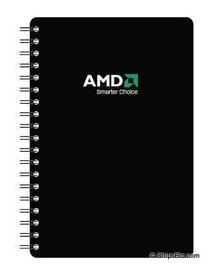 Sold
An 8 x 10" Black Spiral Notebook with AMD logo on the Cover. 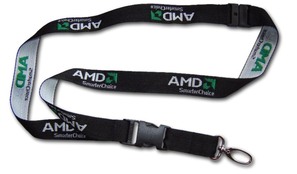 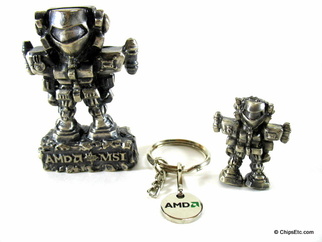 This set comes with two character pewter figurines; one is 2.5" tall, the other is 1.5" tall. Set also includes an AMD keychain that reads "MSI  - Link to the future" & has the AMD logo on the other side.

MSI created it's "link to the future" corporate slogan in 1999. MSI's product lineup throughout the years has included motherboards designed for gaming PC's, many models used AMD chipsets and they also supported AMD processors such as the AMD K-7 Athlon which was popular back in 2001.

This set of character figurines comes in a stainless steel collectors tin with soft foam padding inside. 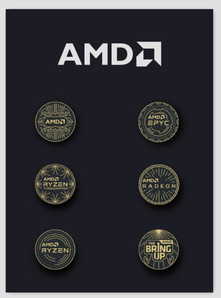 This is a metal die cast set of 6 lapel pins from AMD that feature their RYZEN, RYZEN THREADRIPPER, EPYC, and RADEON processor product logos.

​Each pin measures approximately 1" in diameter.