​
At Chips Etc. we often get inquires into what is the value of gold found in vintage computer chips and other electronic items.

Our best advice is to always check into the rarity and collect-ability of your computer chip before considering sending it to a precious metal recycler with the intent of scrap gold refining. It may be worth quite a bit more due to it's collectible value than in it's scrap gold value!

If you want to buy gold computer chips, eBay is one of the best places to do so. You'll find lots of sellers offering these items at competitive prices.

There is very little profit from extracting the gold content found in most computer chips and electronic components yourself unless you have significant quantities of recyclable material to be processed. Refining Gold & other precious metals (including silver, palladium & platinum) from CPU's & electronics is typically not profitable unless it's done professionally and in large quantities on a large scale; when processing just a few items the cost is often higher than the value of the gold that is reclaimed. More importantly, the process of refining gold involves working closely with hazardous materials including nitric and hydrochloric acids, as well as Mercury, and should only be performed safely by experienced Gold refiners.

Electronic scrap (eScrap) items (CPU's, transistors, RAM memory sticks, motherboards & other Printed Circuit Boards, fingers, connectors, pins, etc.) can be sent to a professional precious metal recycler / refiner who will extract the scrap gold, silver, platinum, & other precious metals from your items safely and efficiently. In return, the customer will typically get paid between 40 to 60% of the final gold content value after refining. Some precious metal refiners may have a minimum weight requirement when sending scrap material to them; depending on the component type some recyclers may require you sending them 2 lbs or more to work with.

​
​List of components of an Integrated Circuit package that can contain Gold: 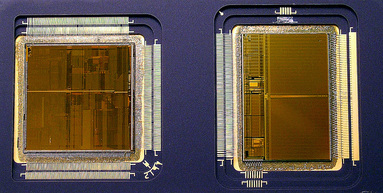 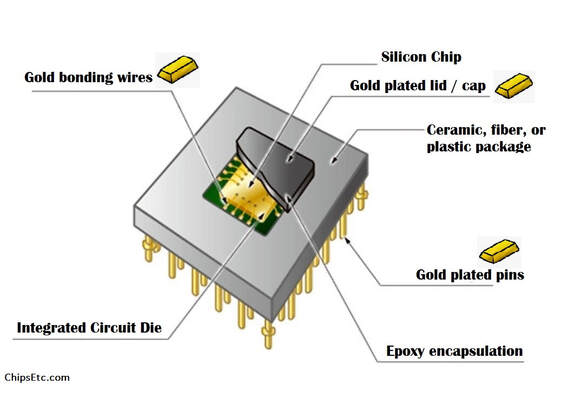 Parts of the CPU that can contain Gold

​How much Gold do CPU's & Computer Chips have in them?

In CPU's and other Intergated Circuits, the most significant use of gold is found in components that make up the IC package itself, not in the actual chip (or Silicon Die) that is found inside.

Older Integrated Circuits, computer chips, transistors & electronics components from the 1960's & 70's contain the highest gold content in general as they were often designed for military and aerospace applications which required them to have heavier gold-plated caps (lids) and leads / pins / connectors, which offered the component increased longevity, heat, radiation and corrosion resistance.

During the 1990's some early ceramic versions of the Intel 386, Intel 486, Intel Pentium Processor, Intel Pentium Pro Processor, Motorola 68000 series, and many DEC Alpha (and similar RISC CPU's) had large gold-plated caps, connector pins, and internally they had solid gold wiring, making these some of the best chips for gold recovery.

Up until around 1998, very fine solid gold wiring was used in wire bonding the computer chip (die) to the substrate packaging. Solid gold wire used in Integrated circuit packaging was typically high-purity, 99.99% fine gold (24 karat). All other components (caps, lids, pins  & pads) were only gold-plated. Some manufactures have also used aluminum or copper wiring in the past in place of solid gold wiring to cut material costs.

The Intel 386 and 486 ceramic CPU's currently are the highest price paid (per pound) for CPU's by the gold recycling companies. This is due to them having gold plated heat spreaders, and the amount of gold plated pins found on the underside of these CPU's, and smaller package size (less ceramic material used in the CPU's packaging per pound).

Also, the Intel Pentium Pro Processor remains a top CPU desired by gold recyclers. It's gold contents are one of the highest of any mainstream CPU package from the 1990's to date, mostly due to it's much larger package size which contributes to a an increased number of gold plated pins, and much larger gold plated heat spreader cap. The Pentium Pro also had two separate chips inside so this doubled the amount of solid gold wire bonding that is usually found in a single chip CPU like the Intel 386 and 486 chips. Gold refining yields of the Pentium Pro have been reported to be as high as around .33 grams per CPU.

​Note: The larger package size of the Pentium Pro CPU also means there is more ceramic material per pound, which is why the Intel 386 and 486 CPU's command a higher recyclable value than the Pentium Pro. 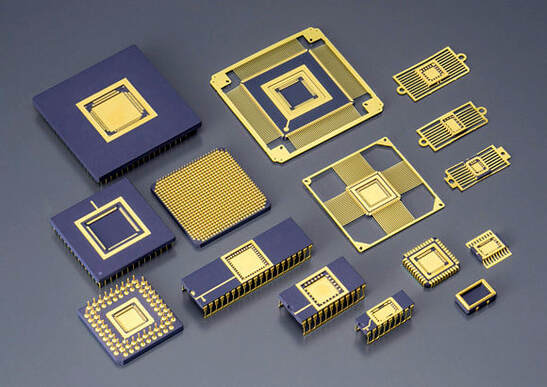 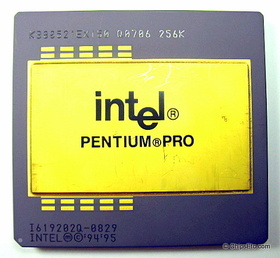 Todays CPUs have a much lower Gold content than Vintage CPUs
​ 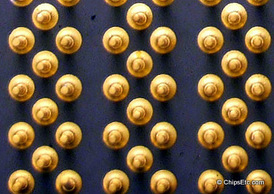 Gold plated CPU pins
Modern computer chips manufactured after 1998 have very little gold content in them because most CPU's no longer use solid gold wire bonding technology or gold-plated lids in their packaging. For the purpose of scrap gold refining, these processors typically have the lowest gold content in them of all the processor type packages.

For example, the Intel Pentium 4 Microprocessor came in an organic (non ceramic) package with a Nickle-plated copper lid, & it did not use gold wire internally to attach the silicon chip to it's package.

It's only noticeable gold content came from it's connector pins on the underside that were gold-plated over a nickel plating. However, the pins were gold-plated to a thickness of only 0.2 µm. For every 500 grams of gold plated pins on CPU's, the average refined yield is typically around 1 gram of pure gold.

Starting n 2004, Intel's Pentium 4 processors (and Dual-core Pentium D processors in 2005) started coming in LGA (Land Grid Array) LGA775 packages that only had Lands (or contact pads) on the underside, and no longer had pins on the chip itself (the contact pins were still gold-plated). Instead, the gold-plated pins were now located inside the LGA775 socket that was built onto the motherboard). The contact pads on the Intel LGA775 socket CPU's were gold-plated at a minimum thickenss of 0.381 µm.

Today, a typical organic CPU package is no longer made with connector pins, but instead they use thinly gold-plated contact pads which are used to socket the CPU to a motherboard. On XEON server  processors, the LAND pads were gold-plated to a minimum thickeness of 0.762 µm.

Some CPU packages use lead-free solder bump connections on the underside that permanently interconnect the chip to the motherboard by thermally joining them together at the manufacture (as is the case in many of today's mobile devices such as laptop computers, tablets, and smartphones, which require the CPU to have the lowest profile height possible.)

Some Computer chips are worth more than their weight in Gold! 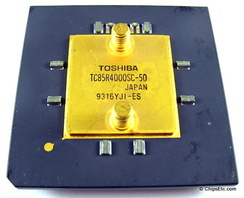 A Toshiba Engineering Sample CPU with gold pins, lids & wires
The good news is that many older computer chips can be worth more than  their weight in gold due to hungry vintage computer chip & CPU collectors.

The Intel 4004 microprocessor, especially the white ceramic version - the Intel C4004, continues to be the most sought after computer chip by collectors today.

Even among modern CPU chips their are still ones worth saving from selling as scrap gold. Especially popular by CPU collectors are any chips, old or new, marked with "ES",  "Engineering Sample", or "Mechanical Sample" on them. These chips were preliminary versions of the chip, they were given to vendors by the manufacturer to test out future designs before being offered to the general public.

However, chips marked "Confidential" or "Internal" are more regulated forms of Engineering samples that were never intended to be used externally by vendors or the general public and should not have been available to anyone outside the original manufacturer. Modern chips that are recently released to the public, or have not been released yet, that show these markings should be avoided by sellers, recyclers and collectors. As rare and sought after as these chips may be to collectors, their are legality issues to owning and selling these chips on the open market. They will always be property of the original manufacturer. They are typically destroyed by the manufacture after use in development.

Some Vintage Circuit Boards are valued by hobbyists & collectors as well...

HP circuit board with heavy gold plating
Depending on their age, computer motherboards and other electronic circuit boards can also contain rich gold content made up of gold-plated circuit traces, edge fingers, connectors, Integrated Circuits, transistors, & memory chips. Before sending your computer motherboards and gold-laden PCB cards to the precious metal recyclers you should make sure to check for their collectible value first. Some of these circuit boards are highly sought after by vintage computer collectors & hobbyists.

Military, aerospace, electronic circuit testers and telecommunications boards, especially ones from the 1960's thru the 80's, often have generous gold-plating of their traces, fingers, connectors & electronic components than the modern circuit boards found in today's electronic devices. The heavier gold plating was used to increase reliability.

However, before any circuit boards are sent off to a refiner for gold scrap they should first be examined to see if they have any chips that may be of interest to vintage computer chip collectors.

This heavily gold plated circuit card from a 1980's HP digital electronic circuit analyzer contains a nice HP ceramic DIP chip with gold plated ground strap & pins, well worth checking out first for its possible value before the circuit board is sent off to be scrapped for it's gold content. If it is sought after by computer chip collectors then it may be worth the time to carefully de-solder the chip and separate it from it's circuit board.

How do you know if a computer chip has any value to collectors?

The best way to determine a computer chip's value is to search Ebay for similar computer chips offered for sale..

Make sure to check Ebay's completed items as well as currently listed items to see if they are in demand by collectors or hobbyists. You might be surprised on what they are currently worth.

Chips Etc. also offers information on researching vintage computer chips which can help in determining the age, & identifying the manufacturer of your computer chips and Integrated Circuits.

​
​
Related:   Valuable Metals found in Computers         What to do with your old, unused computer