Over the years, Intel has awarded many unique items to their employees and business partners in order to commemorate the company's Historical Achievements, Anniversaries & Milestones related to their amazing Semiconductor Technology. 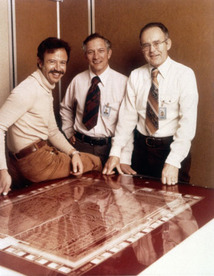 Intel's founders with the 8080 (Intel 1978)
​Intel Corporation was founded in 1968 by Robert Noyce, Gordon Moore and Andy Grove in Mountain View, CA. The company is best know for inventing the first microprocessor in 1971, the Intel 4004, the 'computer on a chip' that made possible the first hand-held calculators and personal computers.

Today, Intel's microprocessors are found in more than 80 percent of personal computers worldwide. Intel's semiconductor based product line-up  throughout it's history has included many items including: chip-sets and motherboards; flash memory used in wireless communications and other applications; hubs, switches, routers for Ethernet networks; and embedded control chips used in automobiles, networking products, laser printers, imaging devices, storage media, robotics, and other industrial applications. Intel has even had educational toys (USB Digital Microscopes, cameras & sound recorders) in their product lineup. 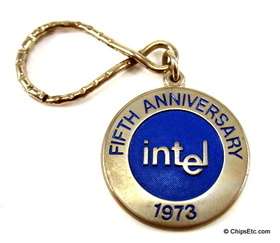 Item #025
In 1973, Intel Employees were busy manufacturing the 8008 microprocessor introduced in the previous year on 3" wafers. Only 2500 employees were on Intel's payroll in 1973.

Annual Revenue in 1973 for this fast growing semiconductor company has reach $66 million. Intel released the Intellec 8 development system for the 8008 this year as well. Intel employees celebrated the company's anniversary with a private champagne cruise on San Francisco bay.

This medallion was given out to Intel employees in 1973 to commemorate that important anniversary. 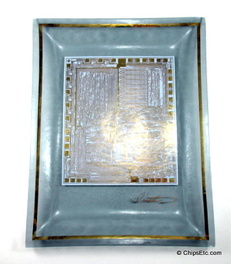 Item #311
Some of the Intel 8080 Microprocessor art dishes had a commemoration on back stating "In Commemoration of the First Thirty Million Dollar Quarter. January - March 1974".  Intel's revenue for the year was over $134 million dollars. There were only 3100 workers employed by Intel in 1974.

This edition was given only to direct Intel employees as a gift by the company and would have been issued in limited release. 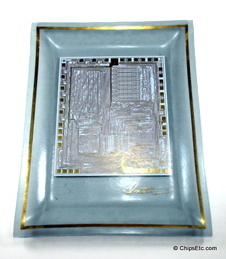 Item #312
This art glass dish with gold leaf accents was a high end gift given to Intel employees in late 1973 to early 1974 to commemorate the release of the 8080 Microprocessor. Being made of glass, relatively few of these have survived the 30+ years.

Successor to the Intel 8008 Microprocessor, The 8-bit  8080 CPU was officially release in April 1974 at the speed of 2 MHz and generally is considered to be the first truly usable Microprocessor.

The Intel 8080 later went on to became the brains of the first personal computer- the Mits Altair in 1975 as well as the SOL-20 and IMSAI 8080 early home computers.

Federico Faggin (co-designer of the Intel 4004) was the originator of the 8080 architecture in early 1972, proposed it to Intel's management and pushed for its implementation. He finally got the permission to develop it six months later. Faggan hired Masatoshi Shima from Japan who did the detailed design under his direction.

Glass with white enamel and gold leaf accents. Excellent condition with no chips or damage and excellent gold accents. 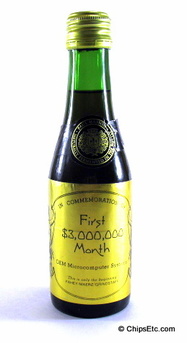 This Bottle of Wine and Carafe were presented to Intel Engineering and Management team employees in 1979 to celebrate this historic milestone. The bottle of wine has never been opened, and the carafe has never been used. Both are still in new condition.

The original recipient of these pieces stated that "most people celebrated by drinking their bottle of wine as soon as they got it" so this is an extremely rare item.

OEM Microcomputer Systems Division was created by Intel Marketing in April 1972 with 12 people. It later transferred 23 people from Intel's Santa Clara, CA campus, to a rented building in Aloha, OR in 1977, and in 1978 moved to the new Hawthorn Farm Facility in Hillsboro, OR to establish the new home for that division.

Critical to the growth of Intel in Oregon was the move of the iAPX432 microprocessor development team from Santa Clara to Aloha. Although Aloha was slated to be only a manufacturing facility, Intel decided that some engineering groups should also move, because of the difficulty of retaining key people in the highly mobile world of the Silicon Valley, where "job-hopping" was routine. The 432 team was the first to come north. The 432 proved to be a radical departure in microprocessor architecture, putting the Portland area at the forefront of innovation in the field. The 432 was a commercial failure, but proved to be the source of key features of the later Pentium processor, also developed in Oregon's Silicon Forest. This development became one of the company's greatest successes.

In 1979, future CEO Andy Grove was named President of the company and Intel was producing 4-inch wafers on 3 micron circuitry. Revenues were $660M with 14,000 employees worldwide. OEM Microcomputers manufactured using the Intel 8080, 8085 & 8086 microprocessors would have contributed to the $3M month success of these numbers in 1979. 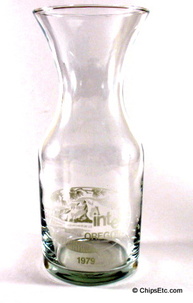 Item #453
This item was given to employees along with the wine bottle above (Item #454) to employees in Oregon to celebrate the First $3M month for OEM Microcomputer Systems Division. 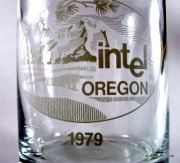 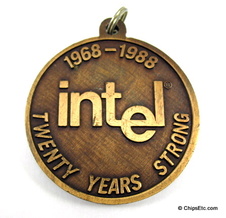 Intel's annual revenue had grown to $2.8 Billion. In 1988 Intel jumped into the rapidly growing flash memory business and introduced 16 embedded control products this year. The i286 was being phased out for the the new high-end i386 chip. The first version of Microsoft Windows was still in development and would come out the following year which helped drive consumers to purchase the i386.

Solid Bronze keychain with relief words "Twenty Years Strong" and the years "1968-1988" with the Intel logo on one side and "20" on the other. 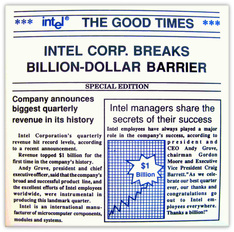 Sold
This is a printed ceramic drink coaster given to Intel employees in 1990 to commemorate Intel's first time achieving one billion dollars of  revenue earned in a single quarter. 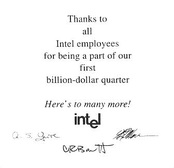 Accompaning note from Intel executives
The note that came with this memento reads:

"Thanks to all Intel employees for being a part of our first billion-dollar quarter. Here's to many more!" 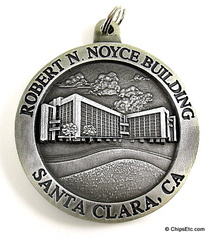 Item #581
This is a solid Pewter Medallion commemorating the completion and dedication of Intel's new headquarters in Santa Clara CA., the "Robert N. Noyce Building" on February 13, 1992.

The new building was named after Robert N. Noyce who co-founded Fairchild Semiconductor in 1957 and Intel Corp. in 1968 and has been co-credited for the invention of the Integrated Circuit in 1959 along with Jack Kilby of Texas Instruments.

Given to Intel employees in 1993 to commemorate the anniversary date. 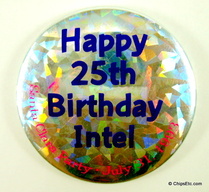 Item #063
In 1993 Intel had grown to 29,500 employees worldwide, Introduced the Pentium processor and celebrated it's first $2 Billion quarter.

This button was given to Intel employees attending the 25th Anniversary company party in Santa Clara, CA. 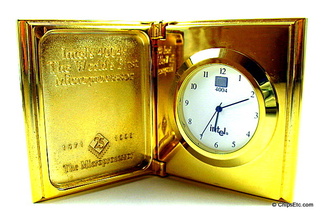 Item #283 (Items #302, 740 Similar)
This limited edition quality timepiece was given out to Intel's U.S. employees in November of 1996 to celebrate the 25th anniversary of the microprocessor, measured from November 15, 1971, the date the first advertisement for the Intel 4004 first appeared in Electronic News Magazine.

Mounted on the clock face near the 12 o'clock position is an Intel 4004 Microprocessor Chip. Due to the extreme rarity of these early Intel 4004 silicon die and silicon wafers (Intel itself has stated it only has one Intel 4004 wafer in its entire Museum collection), it is still an unanswered mystery how Intel came about this many 4004 chips to produce these limited edition clocks.

Clock is Brass, with glass bevel, solid metal throughout, hinged to fold like a book, and synchronized by Japanese movement. 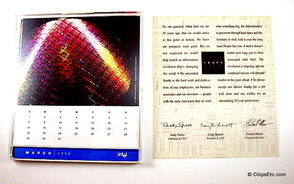 Item #282
This calendar was mailed out to the homes of Intel employees in 1998.

It comes in a CD case and has printed monthly inserts showing highlights from the history of Intel's first 30 years.

It came with a printed cover sheet with an inscription from Andy Grove, Craig Barret & Gordon Moore reflecting on the history of Intel's first 30 years. 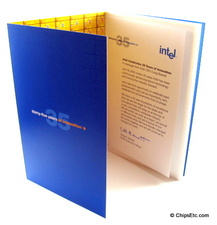 Item #320 (#321 similar)
This full color booklet was mailed out to Intel employees to celebrate the 35th Anniversary of Intel's history.

Inside the booklet it has one page of historical highlights for each of the 35 years in Intel's history, starting in 1968 and ending in 2003.

The booklet also has an introductory page with remarks from then Intel CEO, Craig Barrett. 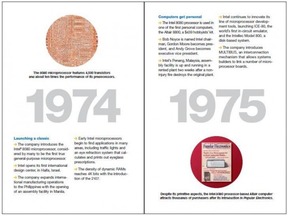 Sample Page from the Booklet 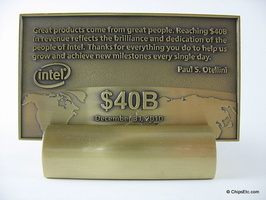 Item #574
On December 31st 2010, Intel Corp. finished the year with record revenue reaching the $40 Billion dollar mark for the first time ever in the company's history.

This solid bronze plaque given to Intel employees in March 2011 commemorating the $40B revenue achievement.

Plaque has a quote on the front from then Intel CEO, Paul S. Otellini. The back of the plaque features graphics in the form of an Intel microprocessor chip.

Comes in Blue Intel gift box, information sheet, and a bronze stand to display the plaque. 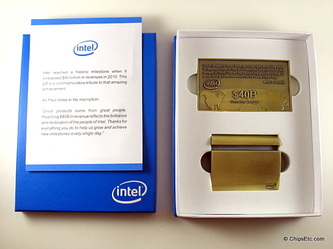 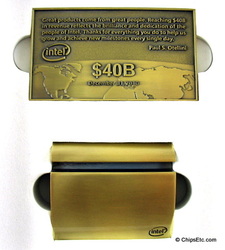 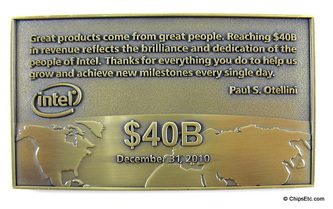 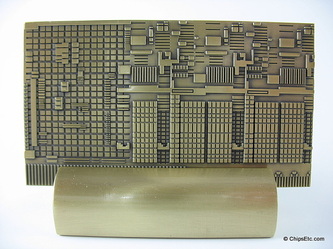 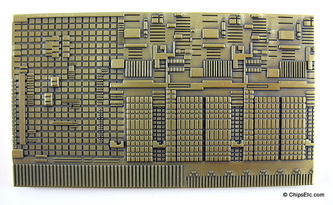