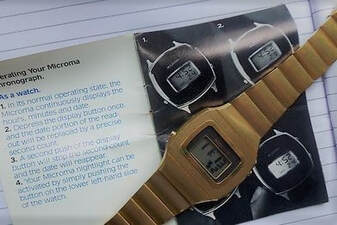 Intel Microma digital watch (1974)
​In July 1972, Intel acquired digital watchmaker Microma Universal, Inc. in their first attempt to enter the electronic watch market. The idea to purchase Microma came from Intel's co-founder Gordon Moore, who was vice-president of the company that year, but would later become CEO. He was looking for new product opportunities for Intel to expand their growing chip business, outside of their lineup of chips used for calculators and computer memories.

Before Intel acquired them, Microma was a leading semiconductor manufacturer based in Cupertino, California. They were a pioneer in developing liquid-crystal displays (LCDs) for use in timekeeping products, such as digital watches.

The $300 Intel Microma watch was the first watch available to retail customers that had a liquid crystal display (LCD). The digital watches that other companies were offering had red LED displays that the user had to push a button in order to see the time displayed. With the LCD display on Microma's watch, the time on the watch was displayed all the time. The Microma watches were also very popular gifts awarded to Intel employees during the 1970's when employees reached their 5 year anniversary with the company.

The original Microma watch featured an Intel 5810 CMOS integrated circuit that gave the watch it's brains. The Intel 5810 chip is now considered to be one of the very first examples of a true system-on-a-chip (SOC). The Intel 5810 SOC chip supported an 3.5 segment LCD display with Time/Seconds/Date functions, and was part of the MCS-5000 clock family of Intel semiconductor products.

By 1977, competition in the digital watch business had become fierce. No less than than 60 companies in the United States were making digital LED & LCD watches, including industry leaders like Fairchild Semiconductor, Texas Instruments, Commodore, Hewlett-Packard, Hughes Semiconductor, and National Semiconductor.

Due to the heavily saturated market and falling prices of LCD digital watches, Intel made the strategic decision to shut down their Microma digital watch business in 1977.

​In late 1978 Intel would work a deal to sell off the Microma brand to swiss watchmaker called Endura, and sell the watch designs and the manufacturing site in Cupertino to Timex Corp. Intel has lost more than $15 million dollars over the 6 years they had held Microma. 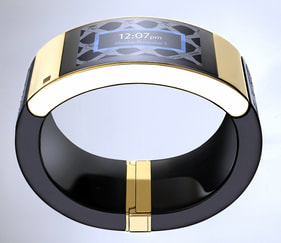 This time Intel's new devices group wanted to showcase their own idea for a smart watch, and one that would also be very fashionable. The idea of a new style of smart watch grew into a wearable smart bracelet design.

The brains inside the MICA smart bracelet was a 32-bit, single-core Intel Quark SOC chip. The Quark chip was a smaller, low powered version of Intel's ATOM processor. It was compatible with Facebook, Google, Yelp, and other applications.

This same week that intel introduced their MICA smart bracelet in New York City, Apple would unveil their upcoming $349 Apple iWatch line of smart watches, which would quickly become the worlds most popular wearable device when it became available to the public in early 2015.
​
​ 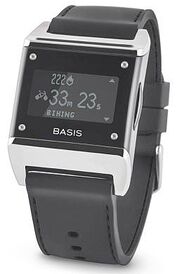 On August 3rd 2016, Intel voluntarily issued a full recall of all Basis Peak smart watches sold worldwide, due to risk of overheating. With Apple now dominating the smart watch sector with their Apple Watch, Intel would abandon their attempt to maintain a branded foothold in the wearables and smart watch market.


Intel would continue to make chips for some watch manufacturers

In 2017 Intel teamed up with Swiss watchmaker Tag Heuer to create their Tag Connected Modular 45, a $1600 luxury smartwatch.

The Tag smart watch used a processor that was designed for smart phones, the Intel ATOM Z34XX, a 64-bit dual-core processor that supported Wi-Fi, Bluetooth, and GPS. It had 4GB of flash memory storage and used the Android Wear 2.0 OS.