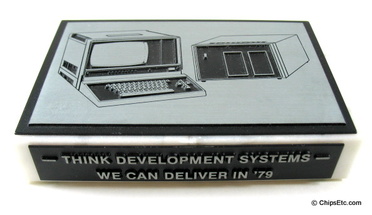 Item #465
The Intel Intelec MDS-800 system introduced by Intel in January 1979 was an early 8-bit computer system used mostly by OEM computer makers to design their 8080 CPU based computer systems. MDS stands for Microcomputer Development System.  It used dual 8" floppy disk drives, the system had 32k memory card slot that was upgradeable to 2 cards for a total of 64k memory max, and was powered by an Intel 8080 Microprocessor.

This paperweight was given out to Intel internal MDS team members in 1979 to motivate increased deliveries of the MDS-800 systems to external developers. 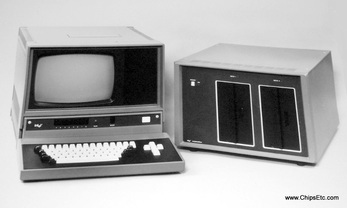 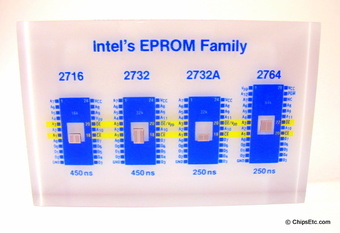 The Intel 2700 series of EPROMs were ultraviolet erasable and electrically programmable read only memory, typically used in memory arrays for many early microcomputer systems.

The EPROM chips featured are: 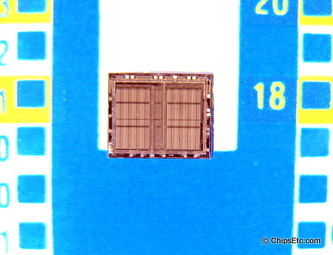 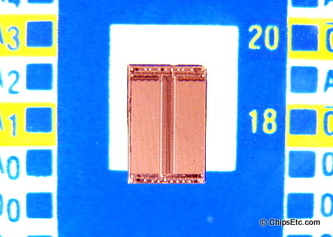 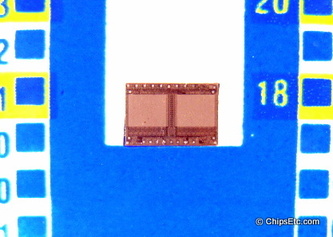 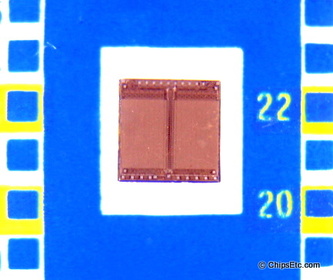 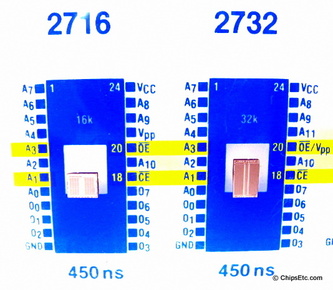 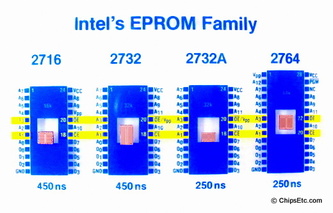 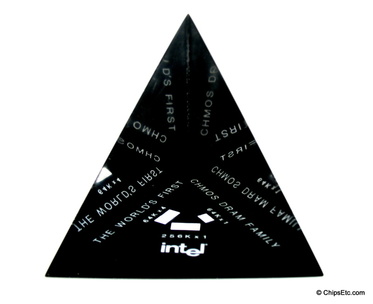 Item #485
This is a Lucite paperweight from Intel celebrating their lineup of CHMOS Dram Memory chips.

The base of the pyramid shaped paperweight is black and features descriptions around the base that identifies what each of the memory chips are.

Close-up of the Intel Memory chips 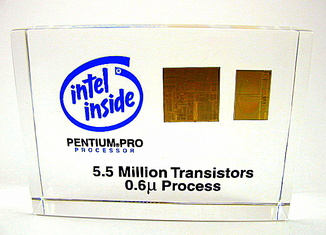 Item #262
The Pentium Pro was a sixth-generation X-86 based Microprocessor developed and manufactured by Intel. The P6 Architecture was originally intended to replace the original Pentium Processor in a full range of applications.

Lucite Paperweight contains a combination of both Core CPU and the Memory Chip for the .6 micron manufactured version of the Pentium Pro Microprocessor. 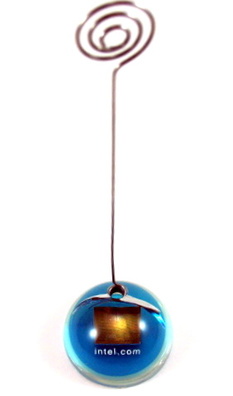 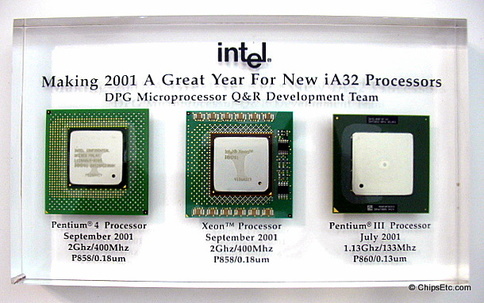 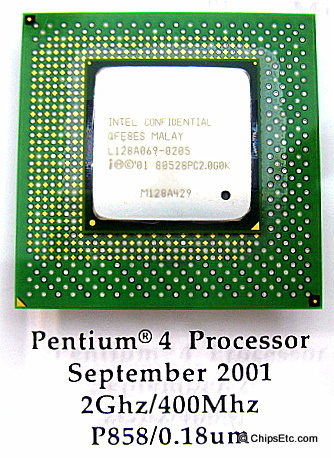 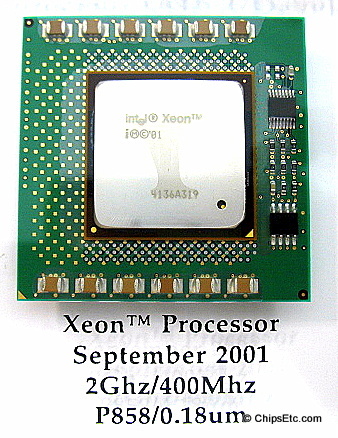 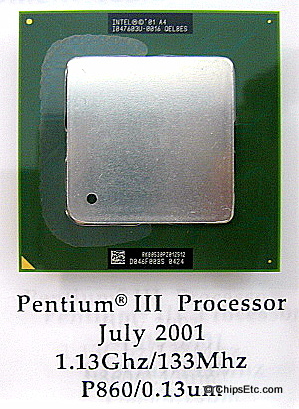 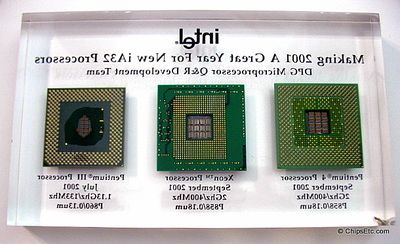 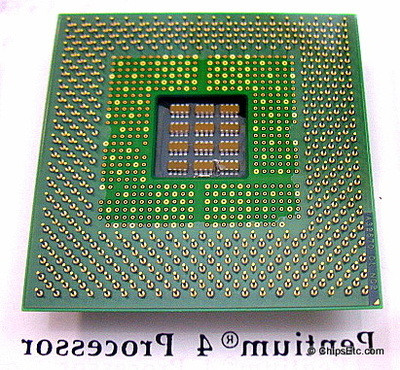 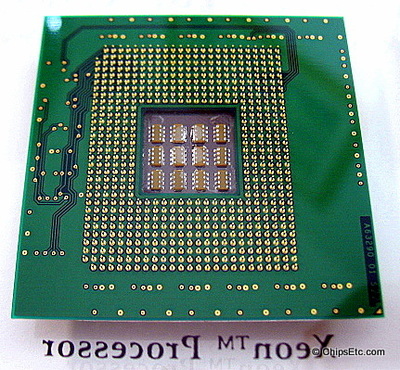 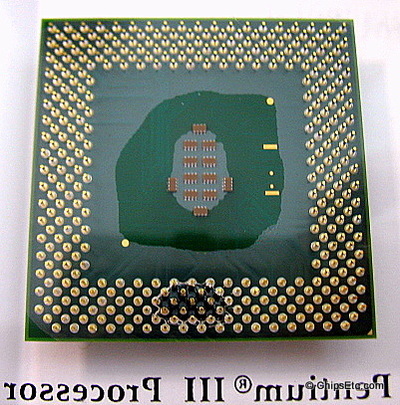 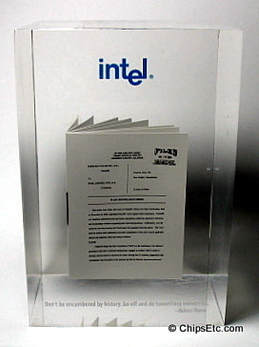 Item #973
Lucite paperweight from Intel's legal department features a miniature copy of the Class Certification Order issued by the court on July 12, 2004 for the case of Barbara's Sales Inc. vs. Intel Corporation.

The class action lawsuit originally filed in June 2002 accused Intel of misrepresenting the performance of their "Willamette" Pentium 4 processors.

​In December 2007, an Illinois judge overturned a state appeals court ruling that would have launched a nationwide class-action lawsuit against Intel.
​
At the bottom of the paperweight is a quote from Intel founder Robert Noyce that Reads: "Don't be encumbered by history. Go off and do something wonderful." 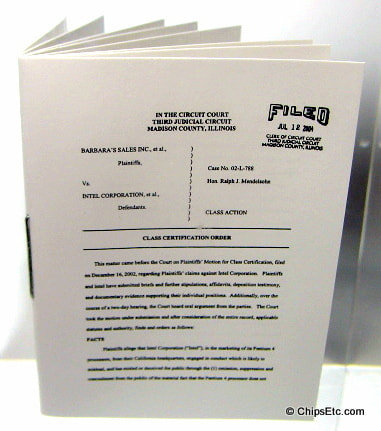 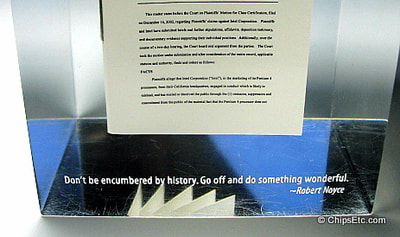 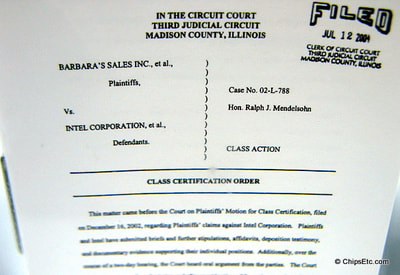 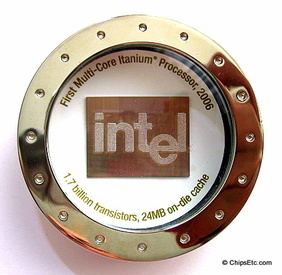 This version of the Itanium 2 processor known as Montecito, was the first Itanium processor to feature dual cores. It had 24MB of on-die L3 cache memory - 12MB on each core. It was manufactured using Intel's 90nm process and contained 1.7 Billion transistors. 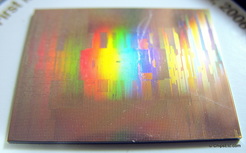 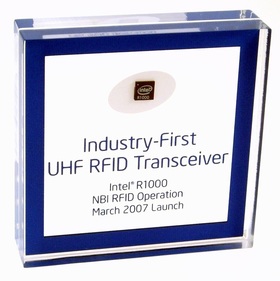 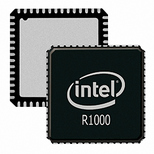 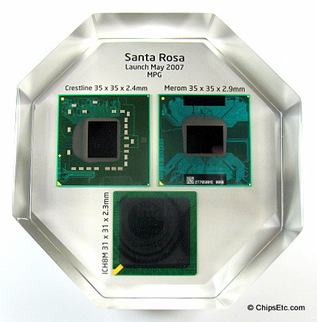 Item #900
﻿﻿This Octagonal Lucite paperweight from Intel's Mobile Platform Group (MPG) features a comparison of their Centrino brand Mobile processor and support chips after design improvements were implemented that greatly reduced their thickness and package size.

Intel's 65nm Centrino mobile processors were competing for market share in the laptop segment against AMD's Turion 64 X2 Dual-Core mobile processor. The thinned "Santa Ynez" Centrino chips (nicknamed "mini-Merom" by the press) enabled OEM computer manufacturers to start offering "Ultra-Thin" laptops in 2008, such as the Apple MacBook Air and the IBM ThinkPad X300.
​
​Most of the chips are marked either SECRET, MECH (Mechanical) SAMPLE, QS SPEC, or ES (for Engineering Sample). 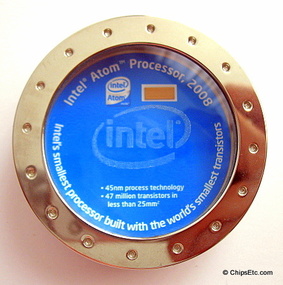 The ATOM processor was an ultra-low-voltage 32-bit CPU designed for use in mobile internet devices and embedded applications. It was manufactured using Intel's 45nm CMOS process and contained 47 million transistors.

In 2012, Intel started offering 64-bit ATOM processors for use in servers.