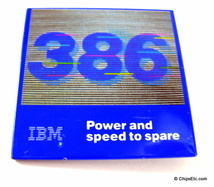 Item #452
The Intel 386 was a 32-bit Microprocessor introduced by Intel in 1985. The first versions had 275k transistors. These Intel CPU's were the brains inside IBM's PS/2 model 40 ISA desktop computers.

The 386 was for a time only available from Intel, since Andy Grove (Intel's CEO at the time) made the decision not to encourage other manufacturers to produce the processor as second source. This decision was ultimately crucial to Intel's success in the market. The 386 was the first significant microprocessor to be single sourced. Single sourcing the 386 Microprocessor allowed Intel greater control over its development and substantially larger profits in later years.

The hugely successful Intel 386 processor led an amazing production run of more than 20 years until it final reached end-of-life in 2007. (morphing from Intel's top of the line desktop computer CPU in 1986, to primarily an Industrial equipment CPU in its later days) 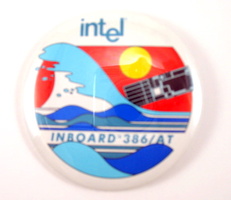 Item #037
The Intel Inboard 386/AT was an ISA board which allowed computer owners to upgrade there slowing 286 CPU based IBM/AT or IBM PC computers into Intel 80386 machines.

The add-in board featured a 16MHz 80386 processor, up to 1Mb RAM memory with an option of an additional 2Mb on a piggyback board, and an optional 10MHz 80287 math co-processor 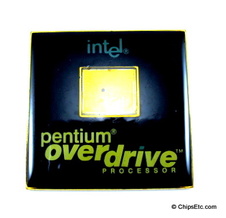 The Pentium OverDrive was a Microprocessor marketing brand name used by Intel, to cover a variety of consumer upgrade products sold in the mid 1990's. It was originally released for 486 motherboards, and later some Pentium sockets.

Intel eventually dropped the OverDrive brand, as it failed to appeal to corporate buyers, and discouraged new system sales.

The Pentium OverDrive for 486's was available in two speeds: 63 MHz for 25 MHz bus systems and 83 MHz for 33 MHz systems. They obviously use a clock multiplier of 2.5. These chips were designed to work in a 5 volt system, and go into a Socket 2 or Socket 3 (the socket 3 must be set on 5 volts).


OverDrive for Pentium 60/66: The original Pentium chips were different than later versions, in terms of voltage, socket size and power consumption. Intel created a clock-doubling OverDrive for these chips, which is sold as one "120/133" chip: when replacing a Pentium 60 it runs at 120 MHz, and when replacing a 66 it runs at 133. This is a true Pentium chip since it is on a Pentium motherboard, although it still benchmarks below the real Pentium 120/133, most likely due to the older design of the Pentium 60/66 motherboards. 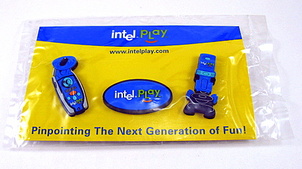 Item #268
This Pin Set contains miniature reproductions of two of the Intel Play line of educational Intel toys that were a joint effort between Intel and Mattel toys.

Pins include the Intel Play Digital Microscope, the Computer Sound Morpher as well as the Intel Play logo. Colored pins are made of injected soft rubber.

Package reads "Pinpointing the next generation of fun". 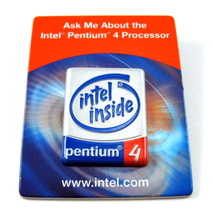 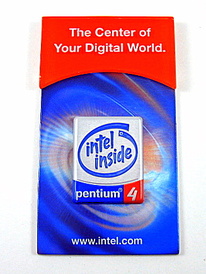 Item #039
Pinback button given out to Intel employees during annual health benefits roadshows.