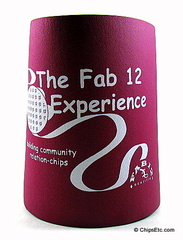 
A $2 billion upgrade at Fab 12 was completed in 2005 that allowed Intel to  produce CPU chips on the much smaller 65nm process on larger 300mm silicon  wafers. 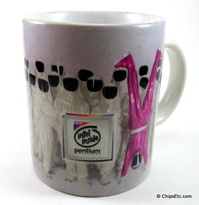 Item was featured in the The "Intel - Innovations in Arizona" exhibit at the Arizona Science Center in 2014. 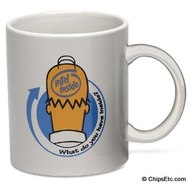 White Ceramic mug features color graphics of Homer Simpson with the Intel Inside logo. Reads "What do you have inside?" 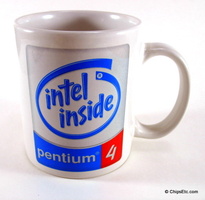 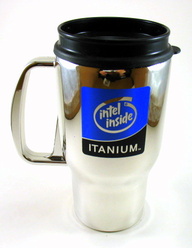 The processors were marketed for use in Enterprise servers and high performance computer systems. The IA-64 Architecture was envisioned by Hewlett Packard (HP) in 1989 as a way to replace the RISC architecture, and was later jointly developed by HP and Intel starting in 1994.

Metal finish cup was given out to a select Intel employees to celebrate the release of the first Itanium Processor (codenamed Merced) in Mid 2001 and features the Intel Inside and Itanium Processor color logos. 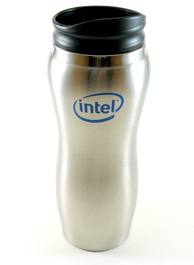